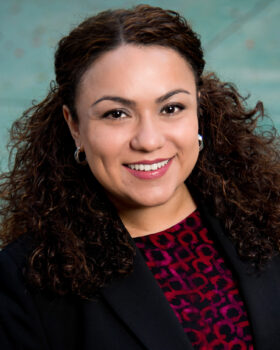 Felicia Medina is a founding partner of Medina Orthwein LLP, a civil rights and employment law firm in Oakland, CA. Her practice focuses on individual and class action employment discrimination and harassment cases relating to race, gender, gender identity and expression, and sexual orientation, as well as wage and hour collective actions. In the early part of her career, Felicia stood out as a top litigator in 2010 as trial counsel who secured the largest employment gender discrimination class action verdict in US history against Novartis Pharmaceuticals. She quickly rose through the ranks from Associate to Managing Partner in her prior firm’s San Francisco office, an office she opened, becoming one of the few queer women of color in a leadership position in a national law firm.

In 2017, Felicia opened her own firm with Jennifer Orthwein, a leading litigator and thought leader fighting for transgender rights.  Medina and Orthwein have settled three class actions, had an educational institution publicly apologize for its anti-Blackness, and have set precedent in the 42 USC 1983 arena.  Additionally, Felicia has secured an unprecedented pre-suit $19.5 million gender discrimination class action settlement against Qualcomm and an $8.2 million gender discrimination class action settlement with Daiichi Sankyo, the first case to be conditionally certified under the Equal Pay Act in the Ninth Circuit. Felicia has also successfully argued a Sixth Circuit appeal in a race harassment case and secured numerous pre-suit settlements on behalf of individuals or groups of employees.