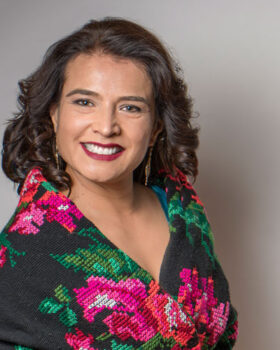 Ludmyrna Lopez was recently elected to the Richmond City Council and is currently the Principal Financial Analyst for the City of Oakland. Previous to this, she served as the Assistant Chief of Finance and Administration for the San Francisco Department of Child Support Services. Ludmyrna has worked for Mayor Willie L. Brown, Jr. as a fiscal analyst for the City and County of San Francisco, advising department heads, the budget director, and the mayor during all phases of the budget, including fiscal planning of new programs. Prior to this position, she served in several leadership positions within the U. S. Environmental Protection Agency in Washington, D.C. in particular related to the Superfund and Brownfields programs. She has also worked with the California State Assembly. Ludmyrna works with the Chicana/Latina Foundation because it encourages and validates Latinas’ pursuit of higher education as a way to increase economic and political empowerment for the Latino community.

Ludmyrna holds a Masters of Science in Public Policy from Carnegie Mellon University, Pittsburgh, PA. She first began her association with C/LF as a scholarship recipient while a student at California State University, Hayward.