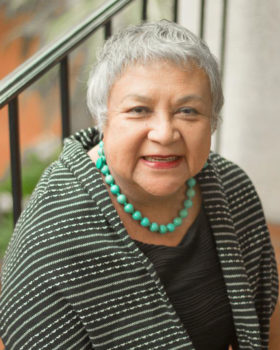 Olga Talamante became the first executive director of the Chicana Latina Foundation in January 2003. Prior to this position, she was the Western Region Vice President of INROADS, a career and leadership development organization aimed at Latino, African American and Native American college students pursuing careers in business and engineering. In that position, she supervised the organization’s 12 regional offices located throughout the western United States and in Mexico.

Ms. Talamante is well known for her community activism and has worked with several service-providing and public advocacy agencies, including Head Start, the YMCA, the American Friends Service Committee and the Argentine Commission for Human Rights.

Currently she serves on the boards of the National Center for Lesbian Rights; El Concilio of San Mateo County, and the Friends of the Commission on the Status of Women. She is also active with GELAAM, a Latino LGBT organization in San Mateo County and with the Latino Forum of the San Francisco LGBT Center.

Ms. Talamante’s family came from Mexico to Gilroy in the early 1960s and worked as farmworkers in the Santa Clara Valley. She received her B.A. in Latin American Studies from the University of California at Santa Cruz.